You are here: Home / Kitchen Gadgets / The Best Countertop Oven Available In 2017 – Guide With Reviews

It seems today everything people do; they do at a fast pace. It looks to me that since that moment they get out of the bed they set the tempo, and everything else must keep up to the end of the day. The people in that kind of a hurry cannot afford to sit and wait in front of the oven until their meal is ready. That’s where the countertop convection ovens step up.

All of the convection ovens work the same, but they can be different from one another in the following matters

One of the best attributes of any electric device is how efficiently does it use the power consumed. Convection ovens do consume less power than the regular ones, but still, check and compare the energy efficiency ratings between the models you like.

The easiest way to determine the size of the oven is whether it can fit a standard or a large pizza. As for the external dimensions, that can be important only if you don’t have much spare space on your countertop. Measure the space available and then compare it to the ovens dimensions. 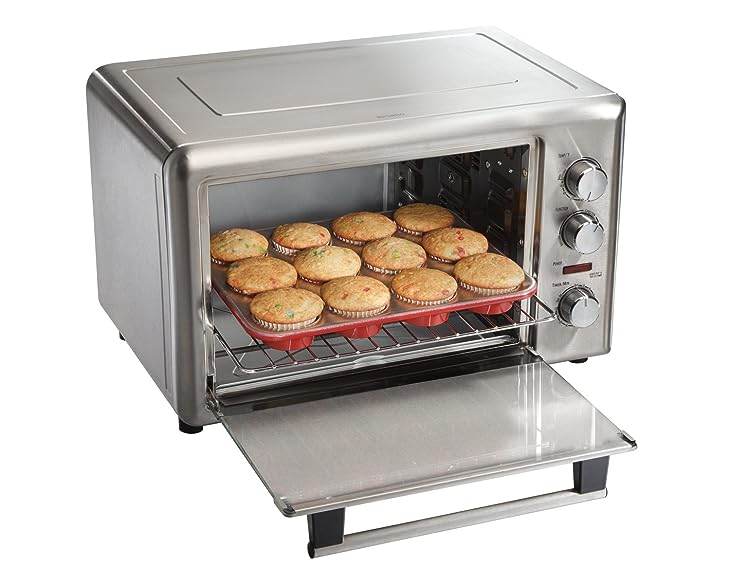 Most of the models have one rack inside, but there are some available that have the multiple ones. This comes down to your preference the most. If the racks are fixed, you should check how much space is there left, will you be able to fit your cookware inside and you should note that the cleaning of the fixed rack will require much more effort than with the removable rack.

Along with the removable racks, the cleaning can be made easy if the parts are suitable for the dishwasher. Check the units description how can you clean it, and what’s the best way to do it. Cleaning the convection ovens in not an easy task, so be sure that you’re making the right choice.

The colors should match your existing cookware and kitchen elements, and I say they should, they don’t have to if you don’t like it so. The designs of the convection ovens are usually similar, but it’s a plus if you encounter some fresh and new ideas.

Anything that can be useful and it makes the oven stand out from the rest is a plus. Being that a temperature or power consumption regulation, an additional option like a rotisserie, LCD for information or the possibility of steaming the vegetables.

The prices vary on the type of the convection oven and the brand. They are more expensive than simple toaster ovens or countertop bakers. The price tag isn’t always the quality guarantee, so be sure that the value for money ratio is as good as it can be.

**Below, you'll find our more detailed reviews, but you can also click the links above to see current prices or read customer reviews on Amazon.​ 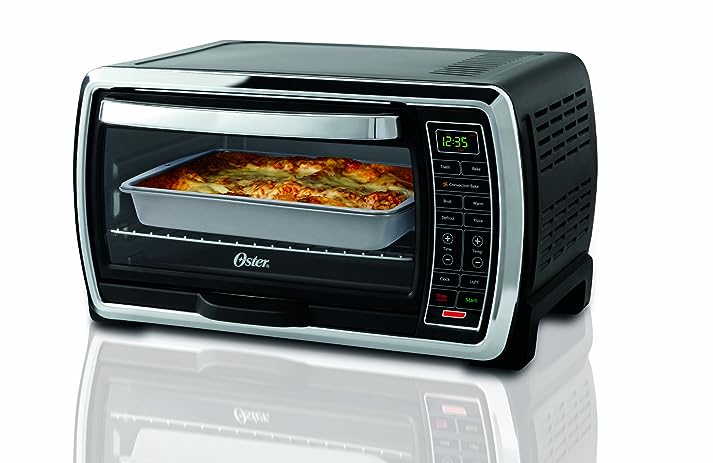 If you consider the size of the convection ovens as a downside/problem, buying this one will get you the largest capacity a convection oven can have. Buying other products on this list won’t be a good choice if you need ample space.

It features a cute curvy design, small display, and options panel on the front. There are seven heating options available, out of which my favorite one was the defrost option. The countdown timer allows worry-free cooking for up to 90 minutes.

There are two rack positions in the extra-large interior which can fit a whole chicken, ham and a large pizza easy. The interior is luxurious, easy to clean and it features a light so you can check is the food ready or not. The important thing to note: wait for the oven to cool off before you start cleaning, you can get burned even if you grab the crumb tray.

I found the control panel very simple and easy to use, especially when there are already options set to choose from. The options are the following: bake, convection bake, broil, toast, pizza, warm and defrost. Each function has its own timer and temperature preset, so all you need to do is hit the button and wait for the timer to hit the zero. With this oven you get the best value for the price, and it’s the best recommendation I can give to you. 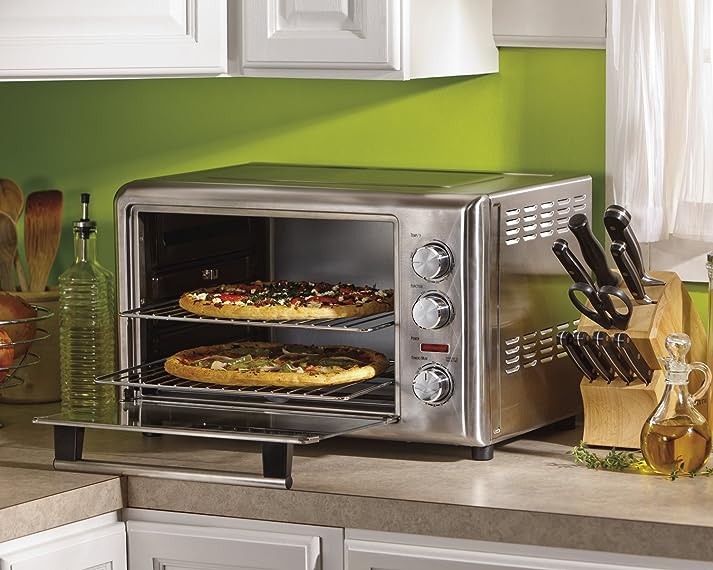 If you’re after versatility and multiple options regarding functionality and usage, this oven is the best possible choice for you. Furthermore, it will provide you with high energy efficiency and ease of cleaning, and these reasons are well worth the purchase.

Although it has a bit smaller dimensions, this convection oven takes the points for its versatility. It has two racks so you can bake more, broil and there is a rotisserie as well. The first thing I tried was the rotisserie, of course, I managed to put the whole chicken on it, it’s such a nice feature to have, and the taste is splendid.

The design is not that modern as it is on the rest of the models I tried, instead of buttons it has dials, but it still was easy to use. The two racks helped a lot in terms of preparing the multiple pizzas much faster. However, it won’t be able to fit two big pizzas; you can make one big pizza if you slice it in half and put one-half on the top rack, and the other on the bottom one.

I was expecting this oven to have more additional heating options like defrost and reheat, but unfortunately, it lacks in this area. It is, however, very energy efficient, it can work with almost half the energy that the regular oven would consume.

The cleaning was an easy task, with the non-stick interior featured. In the price tag speculation, it scored a lot of points since it’s very affordable. If the Oster Countertop is a bit pricey for you or it’s out of stock, this oven can be a great replacement. 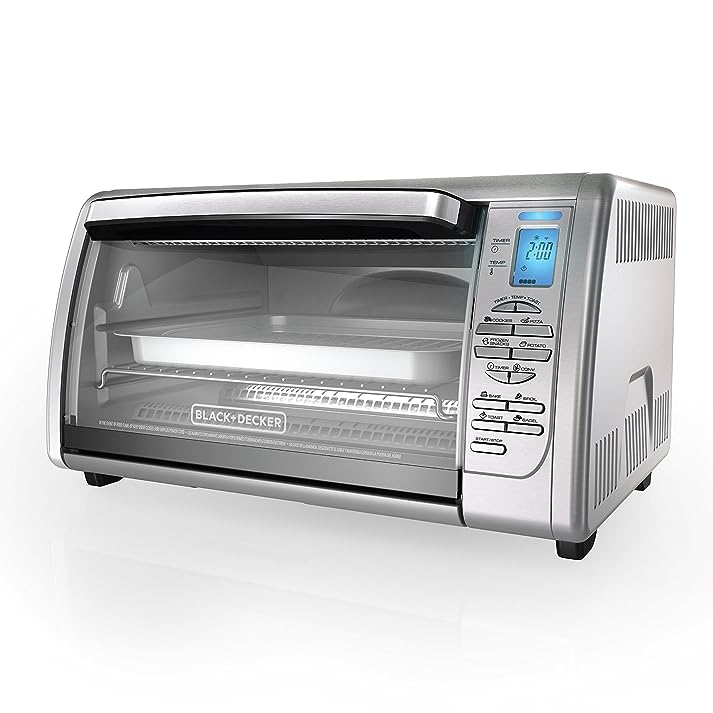 The first thing I found appealing about this oven is its price – this is one of the most affordable convection ovens of this size available. Furthermore, it will provide you ample space, and plethora of functions and extras, which makes it almost a no-brainer when you’re on a budget.

It was able to fit an entire chicken and 12” pizza with ease. The good thing about the interior design I noticed is the round bump it has inside, specially made for pizza baking. The rack, however, is not round, so you should get a round dish to bake the pizza on if you don’t want it to fall over the rack.

It has a simple interface with a nice LCD, the maximum temperature that can be achieved is 400 degrees, which is indicated by the light specially designed for that purpose. The timer can be set up to 120 minutes, which I found astonishing. You can watch an entire movie while your food is getting cooked on its own.

The food can be placed on the racks in two different positions while it’s getting baked with four heating elements. Some additional features are auto shut off, alarm and removable crumb tray. As for the baking functions, there are eight: bake, broil, toast, bagel, frozen snacks, pizza, cookies, and potato. If your budget is around 80 bucks, this oven is the best quality you can get for that kind of money. 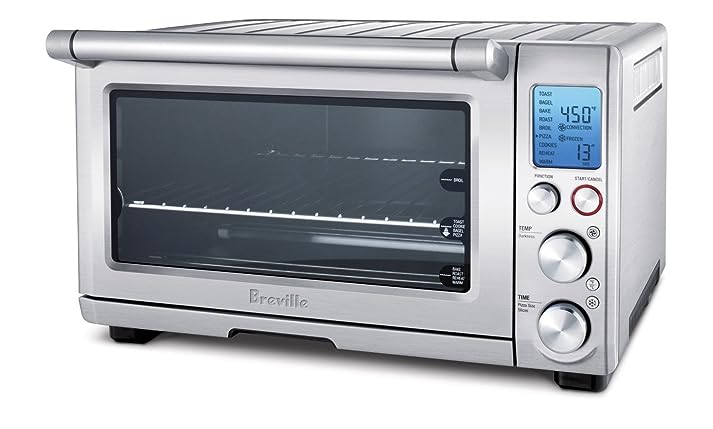 If you’re on a mission to get the best oven money can buy at the moment, this is the product for you. From its functionality, quality of materials and manufacturing, to the optimal size, this oven brings the highest quality baking experience into your home. Rare are the ovens that can match this one.

This oven features a classic design along with the blue LCD screen with nine functions available out of the box including toast, bagel, bake, roast, broil, cookies, pizza, reheat and warm. It includes the Element IQ technology which regulates the heat of the oven.

There are five heating elements with the maximum power consumption of 1800W. What I found extremely useful are the magnets on the door of the oven. The magnets pull the rack out of the oven just enough that I can take the food out without putting my hands in the heated interior.

The racks can be placed in three different positions what proved useful when I needed to use a bit bigger utensils. The heating elements of this oven are made of quartz which means they can change the heat more quickly compared to the regular ones found in different convection ovens.

The cleaning was easy with the non-stick surface in the interior. Which I hoped it would be after broiling the hot sauce chicken that tends to make the entire interior surface of the oven sticky and hard to clean. There is also a crumb tray available to help the cleaning as well. This oven is the next level pick, if you want something great and you’re not too concerned about the budget. 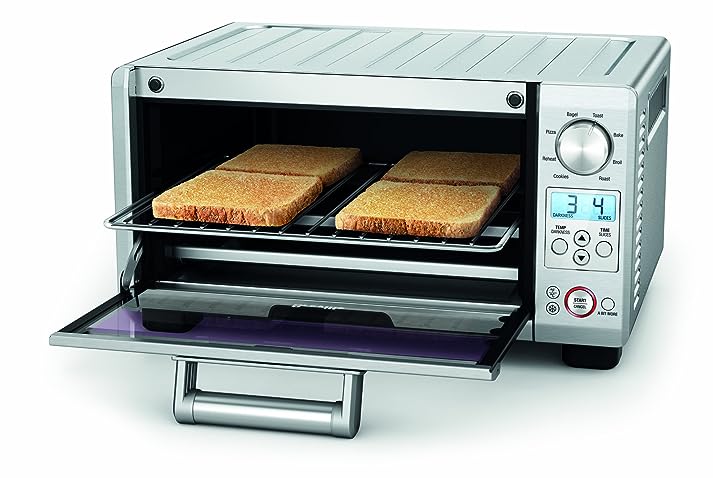 This oven has won me over by its capacity and dimensions – it’s quite impressive what the manufacturer did with this one! If your kitchen is small, but you want a quality device to rely on for baking, this oven is a great choice.

Oven built in small dimensions especially for the people that need something that has a small footprint but does the job well. You will manage to fit this mini oven even in some shelves due to its compact size. The easier way to determine is the size enough for your preference is the size of the pizza it can fit. I managed to bake the 11” pizza with it.

This oven is not a convection one, but the baking was satisfyingly good. And it doesn’t lack in multiple functions at all; there are eight functions available: bake, broil, roast, cookies, reheat, toast, and pizza. There are three rack positions so that you can bake multiple smaller pizzas at the same time.

The controls are incredibly simple. There is a black lit LCD screen, dial for the function choice, and buttons to start, cancel and to prolong the baking period a bit more. In charge of heating are the four quartz heating elements that get hot very fast. Changing the temperature was surprisingly quick for a small oven like this. It features an auto shut off option and a sound signal that is very loud, much louder than I would like. For those of you that want something really compact and useful, this could be the best choice.

Given the all of the advantages and disadvantages, the one con I could forgive the most to this kind of oven is the interior size. The Oster Countertop Convection Toaster Oven had everything else I needed, and it was up to the challenge. It stood out with its largest capacity possible for the countertop oven, its defrost option and easy cleaning.